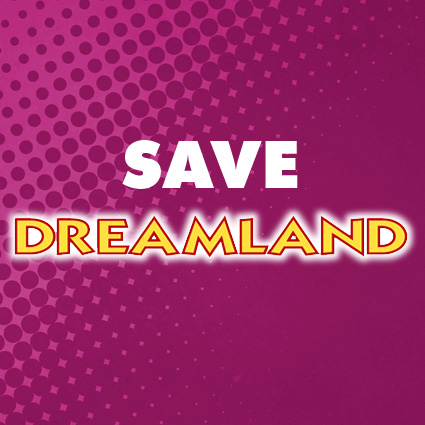 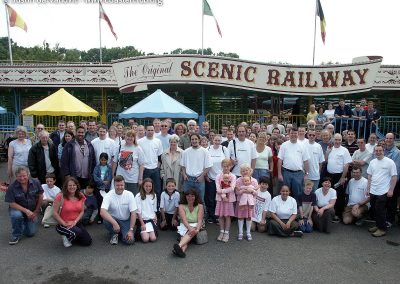 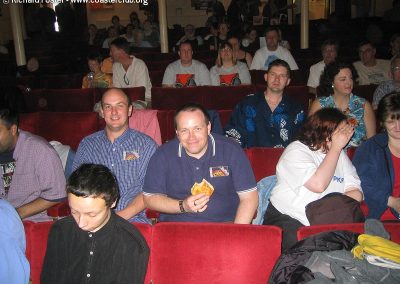 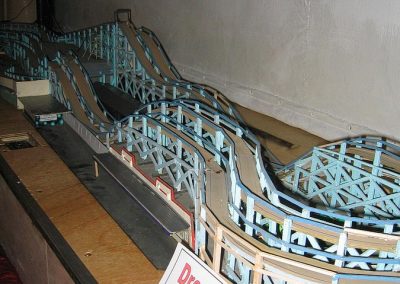 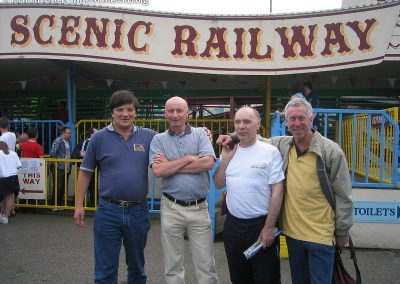 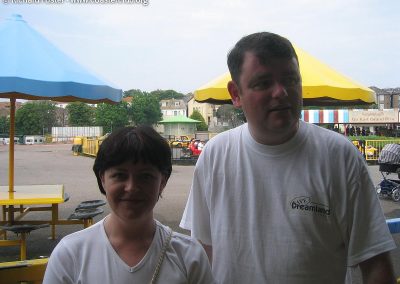 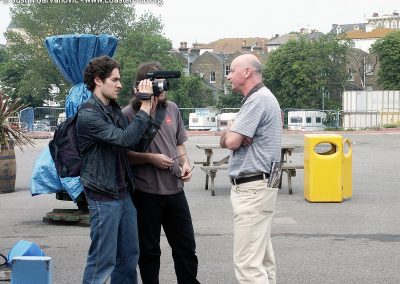 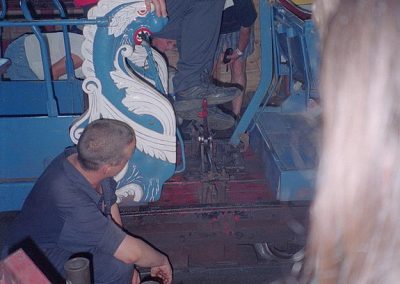 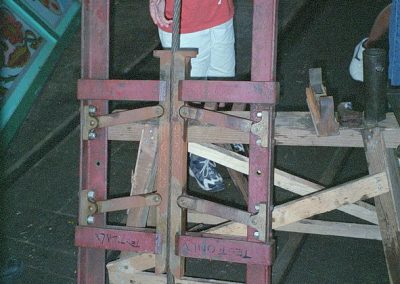 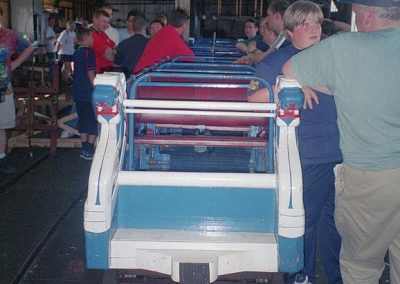 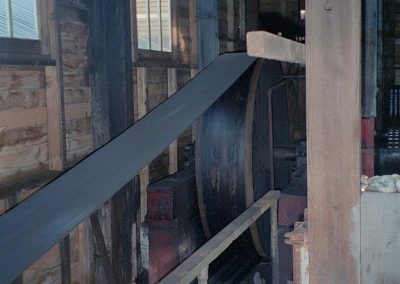 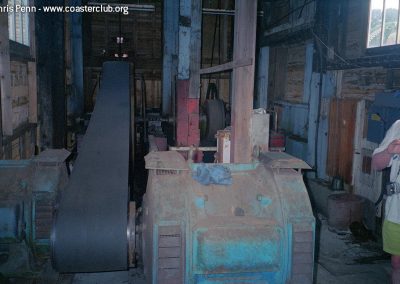 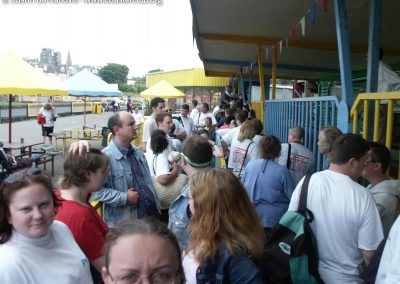 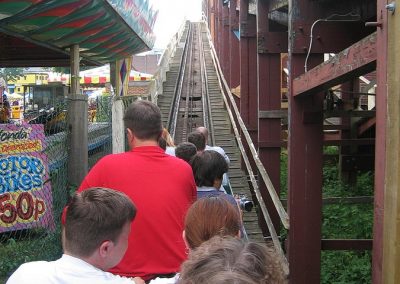 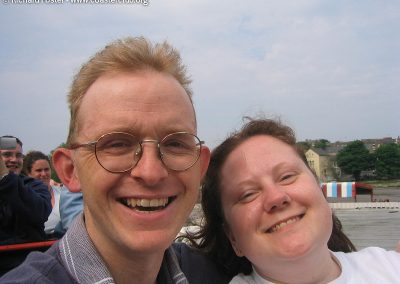 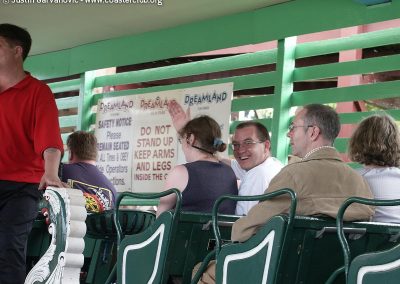 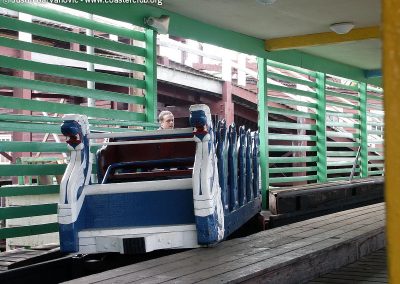 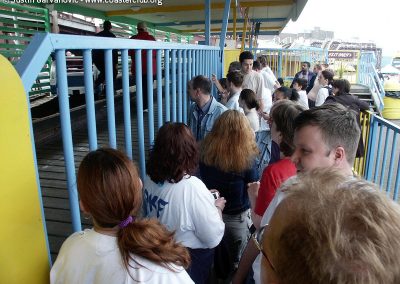 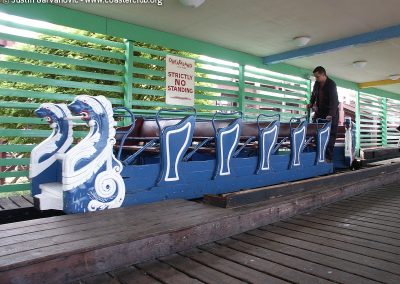 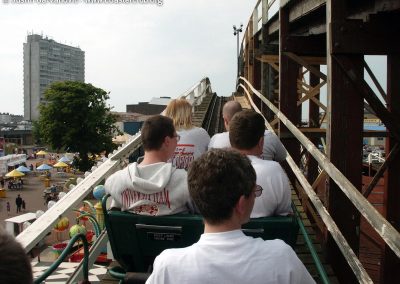 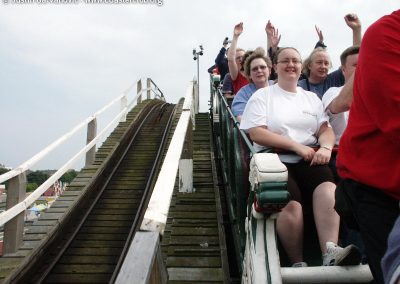 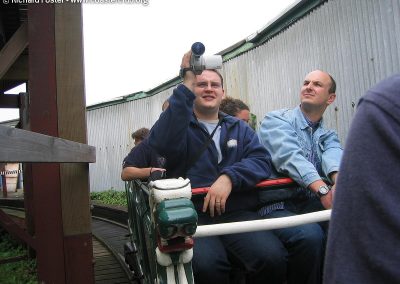 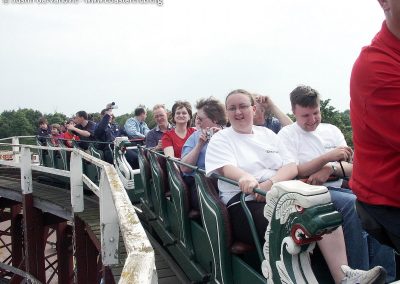 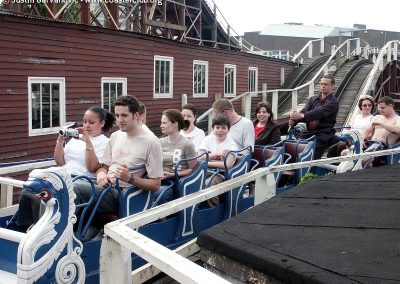 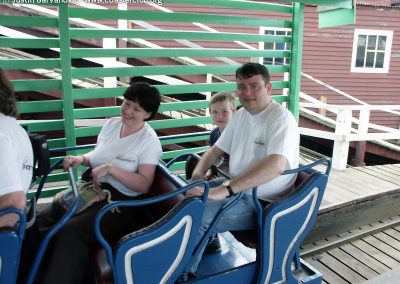 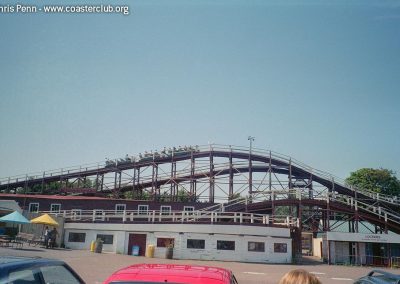 David Ellis
The day went very well in my opinion. The weather was a worry to start with, because after arriving it started to rain… and rain… and thunder… and lightning… and rain etc; very heavy rain for about 20 minutes or so. Many sheltered in the Scenic Railway station, others in their cars, Susan and I sheltered in the toilets! Fortunately after another brief spell of rain just after 10:00 it stayed dry the rest of the day.

John Husband (Scenic Railway maintenance), David Collard (brakeman) and Colin Kiddell from the Scenic Railway Trust gave a short demonstration and question and answer session in the maintenance shed of the Scenic’. Susan and I missed the beginning, as we had to wait for the rain to ease-up before we left the toilets and ran to the Scenic’!

John’s considered opinion was that moving the Scenic’ was not an option, as so much wood would be damaged in dismantling the ride it would cost at least £1.5m (his best estimate) to totally rebuild the ride on another site, if a suitable one was found.

Basically the Trust need to make the Scenic Railway financially viable this year, or it would cease operating… irrespective of what happened with the development plans. The Trust needs our support… Ride the Scenic Railway… spread the word about Dreamland and the Scenic Railway, write to the media, and, if you can, make a donation to the Trust. I know I am going to make a personal donation after hearing what was said today, and how much hard work the Trust, Nick Laister, Sarah Vickery and Scenic Railway staff are putting into saving the ride, and running it this season.

Susan and I spent the last two hours of the day riding the coasters (Scenic Railway, Maurer Söhne Wild Mouse and the Little Blue Coaster… a small junior coaster from L&T Systems (I believe) which has track that resembles a hybrid of Vekoma and Zierer).

Our day finished with a back seat ride on the Scenic’… with loads of airtime! Given that this coaster is 83 years old, it still gives an excellent ride; a tribute to the way it has been looked after. Let us hope that this special ride can be saved and that Dreamland can be rejuvenated to its former glory.

Justin Garvanovic
The basic point behind our presentation was that a roller coaster is more than just a collection of wood – or even steel. The Scenic Railway, and Dreamland is responsible for a lot more than just giving good rides. It’s responsible for First Drop, the RCCGB and the ECC. And without all this, friendships would not have been forged and I think it unlikely David and Susan would have got married in Vegas on our trip. I am sure they would have got married somewhere though, just somewhere boring, like a church!!

One of the funniest moments of the day though happened when we (Richard Davis, Richard Foster, James Lawrence and myself) were sitting in Richard D’s car, waiting for the rain to hopefully stop. Jim’s car was 20 feet away, but he was in our car talking. All of a sudden he comes alive, swearing like a trooper, about the fact his car was about to be ticketed. He could see a cap wearing official through the rain spattered windscreen. Out he jumped – faster than I have ever seen him move before – with the aim of getting his car moved. Only then did he discover that it was in fact someone from the Salvation Army walking down the road!

Paul Orsmond
I really hope the Scenic’ can be saved, after riding it for the first time yesterday, I thought it was a great ride with some good airtime too. It really would be a huge shame to see it go, It really is a classic.

Mark Riley
Throughout 2003 the Club has been actively supporting the Save Dreamland Campaign, an initiative set up by Nick Laister and Sarah Vickery. As a part of this we were able to join the Campaign for the Save Dreamland Convention that look place on June 1st.

The day kicked off with a great behind-the-scenes tour of the Scenic Railway. John Husband, who has worked on the ride for 25 years, headed a very insightful discussion about the ride and its workings. Brakeman Dave Collard was also on hand to answer questions.

Moving to the Theatre Royal, local councillor and historian Mick Tomlinson gave a presentation on Dreamland’s history and long lost attractions. Richard Foster and Justin Garvanovic took to the stage to explain the significance of the Scenic Railway. The final speaker was Nick Laister, founder of the Save Dreamland Campaign, who gave an update regarding the progress of the Campaign and the possibilities for the future of Dreamland. Various short films were also shown during the day. A question and answer session wrapped up this part of the day.

Attendees once again gathered at Dreamland to ride the Scenic Railway and to show their support for the Campaign. The day was very interesting as well as a lot of fun. Hopefully we will be able to enjoy many more trips to ride this very special coaster.

Justin Garvanovic
Both the Club and I have strong links with Dreamland and the Scenic Railway – it was my first coaster. The thought of it not being here is too frightening to contemplate. It has to be saved.